Further is a 42-foot-long Dutch-built Trintella aft-cockpit sloop. She has two full cabins and two heads, along with a well-appointed salon, excellent galley, and a decently equipped nav station. She’s solid and strong yet comfortable, and she’s equipped with all the usual electronic/navigation equipment. Safety equipment includes an EPIRB and PLBs, Winslow life raft, MOB systems and other equipment required by the Newport-Bermuda race (which a previous owner competed in). A complete sail inventory is supplemented by a 75hp Yanmar diesel, and there’s a 9’6″ RIB dinghy for tooling around in.

As for me…I learned to sail in summer camp when I was 12 or 13, and grew up sailing our family’s Hobie Cat off the beach in front of our home. I crewed in local yacht club races each summer when in prep school and college, and did a couple of deliveries in my early 20s. After that, I retreated to the mountains of the western U.S. for a couple of decades, returning to sea level in Alaska in 2004, and to shoreside living and sailing in 2007 in San Diego. I got a handful of American Sailing Association certifications and then crewed on a delivery from St. Maarten to Newport, R.I., with a Dutch couple, Boogie and Marlies, who became close friends. I later crewed for Boogie and Marlies in the 2012 Heineken Regatta, and from the Grenadines to St. Maarten, from St. Maarten to Bermuda, and from New York City to Rhode Island in 2013. Our big adventure, however, was spending the summer of 2011 aboard Polar Bear, a 72-foot steel charter boat that we ran (well, they ran it and I crewed) from Newcastle, England, to the Shetland Islands, northern Norway, Jan Mayen Island, Iceland and ultimately to Greenland, before returning to Iceland, the Shetlands and Newcastle. What a fabulous adventure and a great experience, too. After that summer, in December 2011, I earned my Royal Yachting Association day skipper certification. 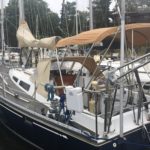 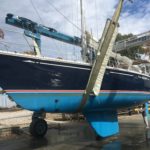 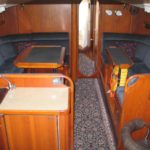