I’ve mentioned a few times that one of the perks of being at this particular marina is that we’re located up at the head of a cove where a small creek enters Chesapeake Bay. There’s a little, untouched natural area — trees and thick brush — at the mouth of the creek that the city of Annapolis has protected. As a result, we get all sorts of critters around here, which is something this nature boy just adores.

Thus far I’ve seen raccoons, foxes, a muskrat and countless squirrels (on the con side: apparently a pair of squirrels made a nest in the furled mainsail of one of the sailboats in this marina…destroyed a $6,000 sail). Just this morning a snake swam by the bow of my boat. Yikes! And the bird life is out of control: a lot of herons of all types, big and small, feeding on the tiny fish at the head of the cove; more cardinals than I’ve ever seen in my life; same with the robins; geese making a ruckus and ducks coming to the boat for handouts; vultures by the score; a couple of eagles; and lately, a host of ospreys — including a pair that have been building a nest high in the tree opposite Further’s slip.

And with this week’s explosion of summer in the mid-Atlantic — temps in the 80s and low 90s, hot sun — I’ve been sleeping with my hatches wide open. Which meant this morning I was awakened by the piercing cries of those nest-building ospreys and the repetitive whistles of some cardinals. Beat any ring tone my phone could have delivered, that’s for sure. 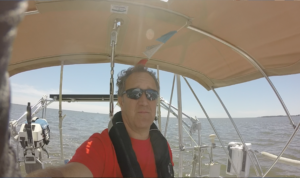 Well, I shot a selfie video while out on Further yesterday, but upon further review (no pun intended), it sucks. So I grabbed a screen shot to use as a still photo to accompany this post and called it good.

And it was a good day. I was accompanied, as I was last time, by my friend Meghan Matthews of Orca Green Marine (product plug: OGM makes LED lights and were the first LED navigation lights to be approved by the U.S. Coast Guard). We motored out onto Chesapeake Bay where there was a small-craft advisory (that means winds of 18-33 mph are forecast or occurring). When we emerged out of Back Creek, however, we found just light breezes bouncing around here and there. There was enough to hoist the sails so we did that and killed the engine, and found we were doing about 3.5-4.5 knots. Oh well. Still, it was nice to be out there.

But we tacked and headed south on the west-northwesterly breeze and the farther south we got, the more wind we got. By the time we got down by the Annapolis Harbor One marker, we were doing a solid 6.5-7 knots without even trying. And unlike last time, I didn’t forget to secure everything below, so there wasn’t stuff crashing around the galley once we started heeling. Live and learn.

And on the same live-and-learn front: I was trimming the genoa as we were headed back toward town when Meghan, who was at the helm, remarked about how I was sticking to my Luddite tendencies and not using the electric winches. To which I had to honestly reply: I’d completely forgotten they were electric. Seriously. In a way it was cool: I don’t want to depend on electricity and winching the headsail can be a good workout. On the other hand, it was utterly clueless on my part. Whoops.

The other big positive from the outing was that Meghan and I agreed beforehand that upon approaching my slip at the end of our sail I would bring Further near the piling at the head of the slip, drop the spring line over the piling and then back in the boat, pivoting on the spring line around the piling. We were simulating me singlehanding the boat and it went very smoothly. In fact, our docking procedure was much smoother than it was a couple of weeks ago when we took Further out. And it made me realize that I can do this by myself if need be. I’d still rather have help (and company), but I can get out more frequently than I have been. And that’s a good thing because practice makes perfect.