There are a lot of reasons to dig where I’m currently living aboard a tied-up Further in Annapolis. I’m in a quiet neighborhood yet within walking distance of all the city’s amenities. Further is tied up in a small marina with another liveaboard who’s a great neighbor and a good friend. There are tons of ducks and herons and other critters here in the upper reaches of this stretch of Back Creek.

But all these have come at a price. And I’m not talking about money.

The first night Further spent at her new home a sharp cold front blew through that brought with it a strong northwest wind. I woke up the next morning to learn that such a wind blows the water out of Chesapeake Bay, taking with it the already thin water up here in June’s Cove. As a result, Further’s keel sat a few inches into the (thankfully) soft mud. No big deal other than my nervousness, but any thought of taking the boat out was on hold until the fierce winds took a break and let the water come back in with the high tide.

Last night’s cold front was sharper and the northwest winds even stronger. And Further is hard on the bottom by well over a foot.

The far side of the cove, where yesterday I watched half a dozen mallards — four drakes and two hens — swim and chase each other around for a good quarter-hour is now exposed and dry. Also yesterday, at the head of the cove where the stream enters the larger Back Creek, I startled a great blue heron who’d been fishing for lunch; the only fish that area can host today better have feet.

It’s also cold. Cold enough that I’m also having to be nervous about things on board freezing. I have a couple of heaters on board but it’s still nerve-wracking. The electric, oil-filled heater radiates only a low heat for such a space, and I can’t leave the propane-fired Mr. Heater (used one of these in my basement in Alaska and it worked great, so I bought one to use on board during these cold days) going when I’m not on board. I’ll be replacing the missing diesel forced-air heater when it gets delivered in the next few days and that will take a lot of worry off my brow.

I’m more than a bit freaked out by all of this. I’m not TOO worried about Further — the mud is quite soft in there so she should be all right. And the cold doesn’t bother me but it could bother some of the systems on board that involve water. Even last week’s snow was kinda nice, to be honest. But still…argh!

I’m worrying way more than I usually do, which is not like me. About all sorts of boat-related things. I’ve told friends who’ve asked that the definition of a boat is very true: it’s a hole in the water into which one pours money. To be honest, things I feared based on the pre-purchase survey have turned out better than expected. But there are still substantial outlays of cash going on. The diesel heater, for one, turned out to be way spendier than expected. On the other hand, the electrical system got a bigger thumbs up from the electrician universally regarded around here as a boat whisperer, so that was nice.

One of my dearest friends counseled me to “enjoy the shit out of it all,” calling even the seemingly negative aspects like spending lots of money, “part and parcel.” He’s right, and I’ve been trying to remember his words when the temperature drops and things break and Chesapeake Bay disappears.

I’m not much for astrology (okay, not at all), but there’s a weekly horoscope I peruse online mostly because it’s usually very upbeat and encouraging. And the past couple of weeks have counseled staying positive and trusting because the big change I’m going through is the right one. That’s been comforting. It’s really seemed to fit the exact questions I’ve been wrestling with concerning Further. So to paraphrase Ronald Reagan: I’ll trust…but continue to check the dock lines. 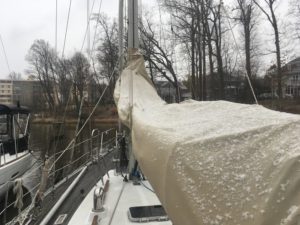 It wasn’t the snowpocalypse people around here were fearing, but it’s still coming down. In fact, now, at lunchtime, the snowfall is getting heavier. Sigh…

UPDATE: Here’s what I just came home to… 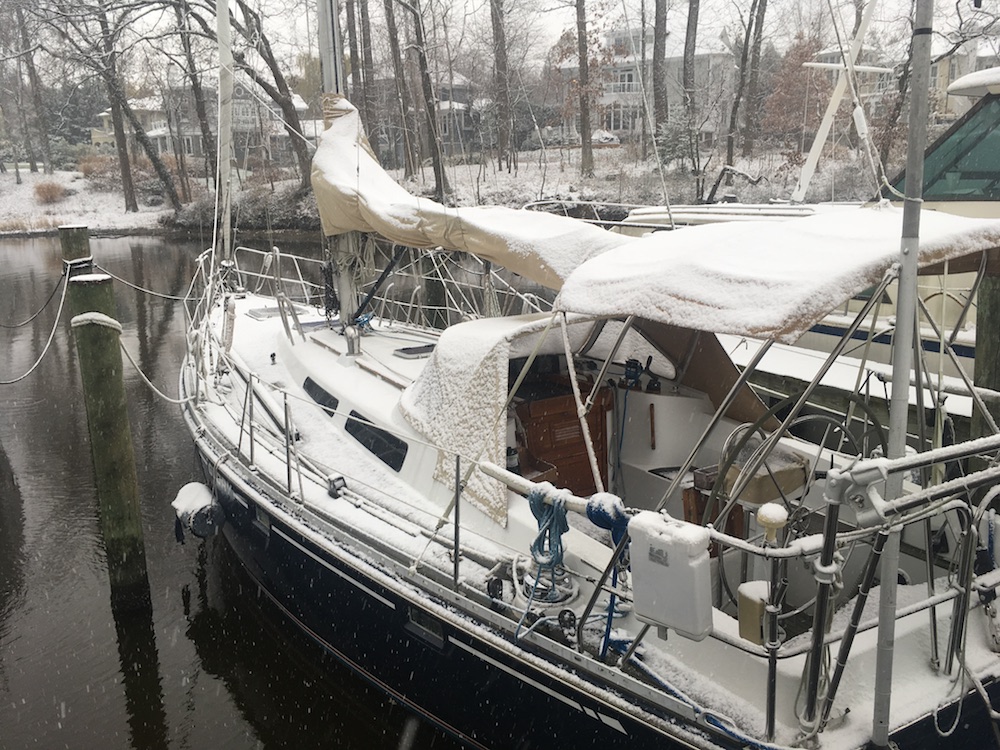 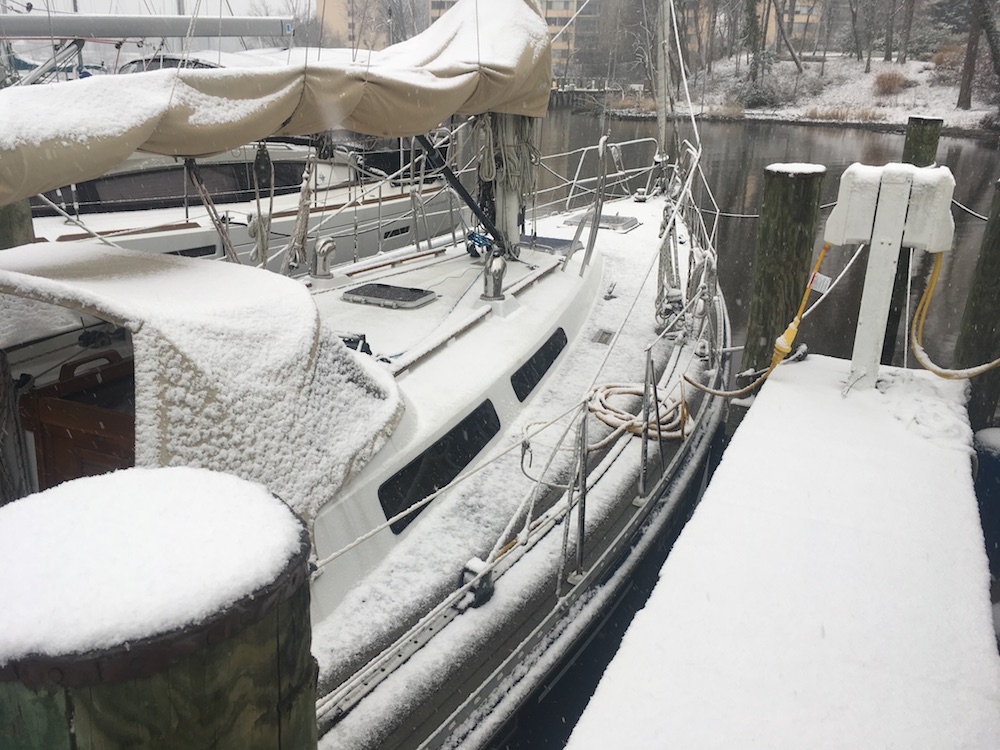 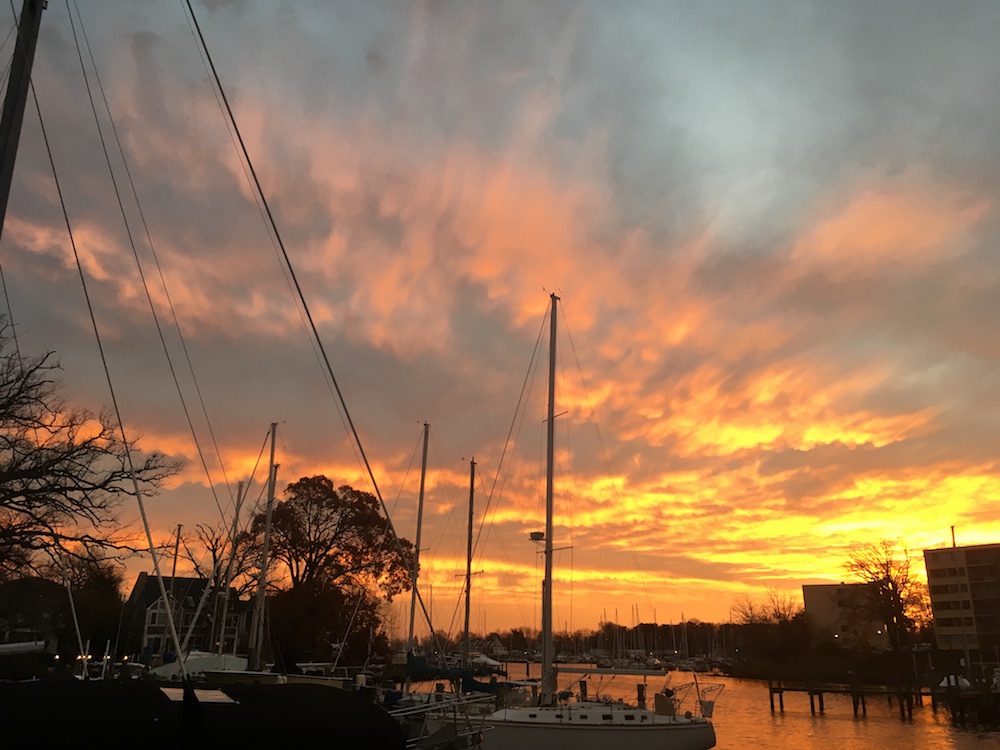